If an airport has issued general airport revenue bonds to fund capital projects, the top priority of its financial operations is to meet the requirements of the bond document, such as generating enough revenue to pay debt service.  The calculation of debt service is fairly complicated, as detailed below.

An airport may include multiple series in one bond issue. The State of Hawaii issued $244.3 million of Airport System Revenue Bonds in 2015.  This $244.3 million is referred to as the par amount or the principal amount. A major component is subject to Alternative Minimum Tax (AMT).

The $244.3 million will not be repaid on one day. Instead, the State specified a series of principal maturity dates, which all fall on July 1, the first day of the State fiscal year. 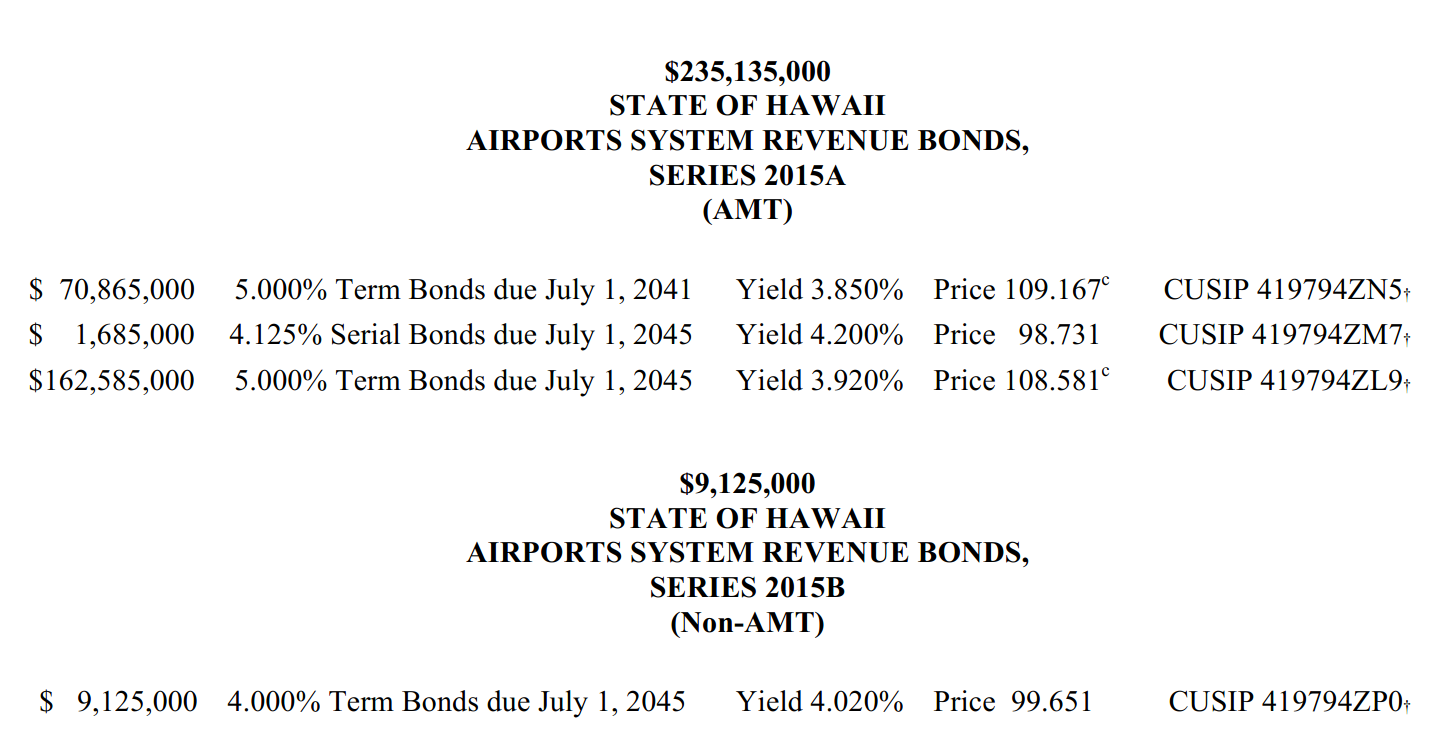 A serial bond typically includes many annual installments, although the example above includes only one serial bond payment. A term bond includes multiple bonds with the same maturity date, but typically has a mandated redemption schedule. The 2015B term bonds included six sinking fund redemptions.  In this case, the principal repayment on July 1, 2040 is effectively $1.375 million.

The amount of debt service in a fiscal year can be calculated on a deposit basis or a cash basis:

Regardless of how the debt service definition is written, an airport is required to make monthly deposits into the debt service fund and other funds, referred to as application of revenues or flow of funds.  Because the airport must generate enough revenue in the fiscal year to meet those deposit requirements, debt service on a deposit basis is a better measure of an airport’s obligations.  In the example above, if an airport uses debt service on a cash basis and collects $365,000 from the airlines, it must find other revenue to meet the deposit requirements of $1.74 million.

The fiscal year for many U.S. airports ends on the last day of a quarter, such as September 30.  Some airports have fiscal years ending in February, April, August or October. Many airports set the first day of a fiscal year as the bond principal payment date, which makes their bond year the same as their fiscal year.  Alternatively, the principal date can be set on any date.  At least one U.S. airport sets a different bond maturity date for each issue, which seems to be a huge administrative burden.

For the first 10 months of FY 2019 ending April 30, 2019, the Airport will make monthly deposits to meet the principal payment of $24.21 million on May 1, 2019.  For the last two months, the monthly deposit is made for the May 1, 2020 payment of $20.93 million.  The interest deposit follows the same pattern, leading to the variance between the deposit basis and the cash basis.

The debt service schedule in the body of an official statement presents the amount the bondholders would receive annually, not the debt service to be deposited/paid by the airport annually.  The difference includes many exclusions and adjustments:

An airport consultant’s role in a bond issuance may include:

In summary, each airport has its own bond document and different definitions of debt service.  A modern-day definition may include multiple pages, including detailed calculations of the balloon payment, variable rate bonds, auction rate bonds and the hedging agreement, among other contents. A bond counsel interprets the bond document and a financial advisor provides the debt service schedule, which are the parties an airport consultant can consult when evaluating debt service.