An airline use agreement covers many aspects of the business arrangements between an airport and airlines, with three primary issues: rates and charges, capital review, and facility control. Embarking on a multi-billion-dollar capital program can provide exciting opportunities for airlines to expand service and for the airport to grow, but may also disrupt a relationship that will take years to recover. A carefully designed capital review process can clarify each party’s rights and obligations, as well as avoid conflicts during the term of the agreement. The capital review process is closely tied to the airport rates and charges methodology and is illustrated as follows: 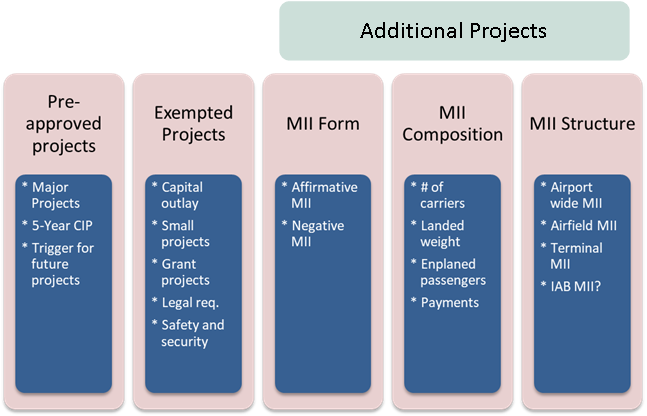 While an airport wants the unfettered ability to undertake capital projects, airlines’ willingness to fund a large capital program is restricted by three issues: cost of capital, the facility development cycle, and competition.

The capital review process is closely tied to the airport rates and charges methodology. As discussed in separate articles, an airport may adopt a residual ratemaking methodology and ask the airlines to pay whatever is necessary to keep the airport running. The airlines would theoretically take unlimited risks. To mitigate such risks, the airlines require strong control of capital planning because they will be the party responsible for the related costs.

On the other hand, some airports implement rate by ordinance or have airline agreements with compensatory ratemaking methodologies. The airport is responsible for generating enough revenue to meet all obligations. Because the airlines will pay for only their fair share of airport costs, they typically have limited or no control over what capital projects will be built.

The capital review section in the airline use agreement answers the following questions:

During the normal course of operations, an airport must undertake capital projects to keep the airport running. Those projects may include small capital outlay, equipment purchases, vehicle projects and major capital projects. Under a residual ratemaking methodology, an airport has little or no discretionary cash. Therefore, the airport must ensure that the absolutely necessary projects are exempted from airline review. Under a residual ratemaking methodology, such exemptions may include:

Other exemptions may include:

If the airlines do not offer residual protection to an airport, the capital review section may not exist in the airline agreement. Even if a section is included, many other items are exempted from airline review, such as projects in non-airline cost centers.

When an airport has additional projects that are subject to airline review, the airline use agreement may include either an affirmative majority-in-interest (MII) or a negative MII:

There are two additional issues surrounding the MII: composition (based on landed weight, number or enplaned passengers), and structure (airport-wide MII vs. separate MIIs for airfield and terminal). Each airport has a fascinating story about how its MII is determined.

In recent years, more airports began embracing cost center MII rather than airport-wide MII. Under the cost center MII structure, the MII for an airfield project is based on landed weight, and the MII for a terminal project is based on terminal space, enplaned passenger or payment. This trend seems reasonable because it better matches the risk with control. There has been no additional MII development such as a separate MII for domestic vs. international facilities, but one is likely to emerge as airports continue finding ways to fund their desired projects.

Under residual ratemaking, the airlines agree to collectively pay whatever is necessary to keep an airport running, and theoretically bear unlimited risks. The purpose of the capital review section is to limit the construction costs, and therefore limit the risks to the airlines. The airports, on the other hand, still want to proceed with their projects, and most large-hub airports are able to negotiate in their favor.

Under a compensatory ratemaking in which the airlines do not offer residual protection, the capital review section should not be needed. Some airports still agree to certain forms of airline capital review as a good-faith gesture, but those procedures should be consultations rather than reviews and approvals.