This article discusses sources of cost per enplaned passenger (CPE), calculation of CPE, uses of CPE in airport finance, and current and potential efforts to supplement CPE with other financial metrics. CPE data in this article are extracted from a database updated from time to time.

Cost per enplaned passenger, or CPE, is the average passenger airline payments per enplaned passenger at a given airport. A majority of U.S. airports provide CPE data, which is considered a key metric to evaluate the financial operations. As discussed below, CPE provides only partial information about the financial operations of an airport and must be considered in combination with other metrics.

U.S. airports report CPEs in multiple documents and to multiple agencies and associations. It is not uncommon to see an airport reporting different CPE numbers for the same fiscal year. Typically, CPE for an airport can be found in one of the following documents:

The following table summarizes the CPEs of large hubs. CPEs for medium-hub and small-hub airports can be found under different sections, and are being updated from time to time.

As discussed above, CPEs reported in FAA Form 5100-127 are calculated strictly based on accounting data, and enable us to identify specific adjustments made by each airport. The following table is a snapshot of FY 2012 and FY 2013 CPE comparison for all U.S. large hubs. 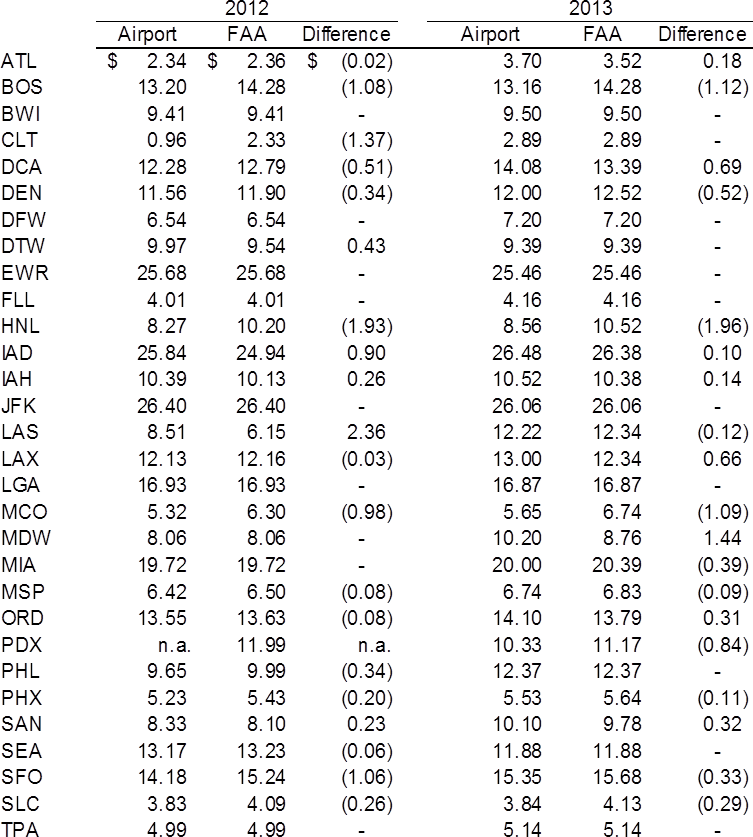 Note: CPEs listed under the Airport column were compiled from audited financial statements, official statements, rating agencies reports, and other documents, and may be extracted from FAA Form 5100-127 data if no other source is available, such as for airports managed by the Port Authority of New York and New Jersey.

After examining airport-reported CPEs vs. CPEs reported to the FAA, we can identify the following factors contributing to variances:

Three issues need to be examined before we can discuss an airport's CPE:

As discussed in the airport finance videos of this website, three sets of rules govern the financial operations of each U.S. airport: GAAP, bond documents, and airline agreements. Specific to this article, airline agreements have a significant impact on how airline revenues are recognized and how CPEs are calculated.

Due to airport rates and charges regulation, maximizing profits may not be a top priority for U.S. airports. Many airports may choose residual ratemaking, although they could generate more revenues under alternative ratemaking methodologies. When an airport indeed converts from a residual methodology to a compensatory methodology, such as MCO, SEA or SMF, the airport will generate higher airline revenues, which results in higher CPEs. An increase in CPE due to changes in the ratemaking approach is not an indicator of deteriorating financial performance.

Second, selection of year-end reconciliation methods can swing CPEs one way or the other. The following table presents an example of budget to actual variance.

For airports with residual ratemaking methodologies, all variances between budget and actual collection must be returned to airlines. In the example above, this airport realized higher passenger levels, higher expenses and higher airline and nonairline revenues than budgeted, resulting in a surplus of $40 million at the end of the year. The airport has two options:

For airports with compensatory ratemaking methodologies, variances between the budget and the actual collection are separated into two components:

To make this calculation more complicated, some airports adopt a two-year process when crediting surplus to airlines:

An airline's operating expenses at a given airport include more than expenses paid to the airport. For example, the airline must hire employees or contractors to process passengers in the terminal, maintain or clean aircraft, or make fuel arrangements. Those expenses are typically not included in the CPE calculations of any airport.

However, the airlines may sometimes decide to take over certain services/responsibilities typically provided by airports. Those services may include, but are not limited to, the following:

The airlines have invested billions in financing terminal improvements across the U.S., including recent expansions of JFK Terminal 4 and Southwest's development at DAL. Historically, the airlines have financed Terminals A & B at BOS, Terminal 1 at ORD, Concourse B at CVG, and many unit terminals at LAX and PANYNJ airports. Many of those special facility bonds have been restructured during bankruptcy processes in the last decade.

CPE has been widely used for many purposes in airport finance, each with a unique set of issues and concerns.

To Evaluate an Airport's Performance over Time

Airport managements are typically evaluated by their ability to maintain or develop air service, although they do not have direct control of air service. Therefore, airport managements pay close attention to airline payments, as a low level of payments could seemingly incentivize airlines to initiate or add service, and report CPE over time as an indicator of airport performance.

However, there are multiple issues involved in using CPE to evaluate airport performance:

To Compare an Airport's CPE to Peers

CPEs are sometimes used to (a) argue with airlines that they could afford a capital project at a given airport, or (b) imply that an airport is attractive to airlines due to low CPE level. In either case, we are guesstimating airlines' decision-making process, when we have much less information than the airlines do.

Second, airlines often make route decisions although such decisions may lead to significant increase in CPEs. An extreme example is Delta's dehubbing at CVG. In 2005, CVG had 11.3 million of enplaned passengers, with more than 90% on Delta flights. Under a residual ratemaking methodology, Delta would pay a majority of airline revenues regardless of the actual level of enplanements. Any service reduction would simply lead to a higher CPE, without reducing Delta's total payments to the airport. Nevertheless, Delta dehubbed at CVG, reducing CVG's total enplaned passengers to 2.9 million in 2013. Despite of airport management's aggressive actions to cut airport expenses, the CPE increased from below $5 in 2005 to $10 in 2013.

Third, fare revenues are typically more meaningful to airlines than are CPEs. This is evidenced by regional airport competition such as SFO vs. OAK and SJC, or BOS vs. MHT and PVD. In both cases, airlines flocked to the large-hub airports with more business travelers and higher fares, and withdrew from smaller markets.

Fourth, airlines will continue to provide different answers regarding whether CPE matters. While legacy network carriers have indicated that CPE, or an airline incentive program, is not a top consideration in their route planning process, ultra lower cost carriers (ULCCs) are much more interested in operating in a low-airport-cost environment. This is because each airline derives different level of revenue from the same airport. According to the Department of Transportation's DB1B database, legacy network carriers such as Delta and United received on average $260 to 270 per one-way trip ticket in the third quarter of 2014, while ULCCs such as Allegiant and Spirit received on average $100. A summary of historical domestic fare data can be found in this link, which does not include ancillary fees.

Finally, airlines' route decisions are based on a large mix of factors including operations, staffing, networks, competition, and other factors, as well as fare revenues and CPEs. Therefore, lower CPE does provide adequate incentives for airlines to initiate or add services, and is only one relatively minor factor in this decision-making process.

Airport finance professionals have made numerous efforts to address concerns when using CPE for different purposes, mostly centered on making CPEs more comparable. Therefore, each airport's CPE is adjusted to reflect tenant financed or operated facilities and equipment, as well as payments made to third party contractors for services typically offered by other airports. In some of the studies, planned capital program costs have been added to the calculation of future CPE, so the CPEs of airports in different stages of implementing large capital programs can be comparable. Other factors contributing to CPE comparison problems continue to be ignored, such as differences in costs of living, ratemaking methodologies, and revenue recognition.

Other efforts have been made to study all-in costs of an airline at a given airport, by incorporating aircraft taxiing time and delay costs. This is a step closer to simulating airline route planning, but falls short by ignoring fare revenues, stage length, fuel costs, employee salaries and wages, network, and competition, among many other considerations.

Nevertheless, CPE will continue to be the most important metric in the airport finance world, due to its reliability and accuracy (as it is calculated using accounting data), availability (provided by almost all airports) and simplicity (one number tells a lot about an airport). It is also far superior to other alternatives such as debt service coverage, which is meaningless for airports with residual ratemaking methodologies. Other financial metrics can be calculated to supplement CPE information, such as:

The following table shows a hypothetical calculation of breakeven CPE for LAX, using the 2015ABC Official Statement. When we project that LAX could break even at a CPE level of $13.58 in 2020, should we be concerned that LAX may charge up to $22.82?

Note: This is a simplified calculation and does not take into account secondary impacts such as of cargo airline landing fees.