This article discusses airport rates and charges regulations in the United States, examines the 2013 FAA Rates and Charges Policy, and reviews large-hub airport ratemaking as of March 2015.

U.S. airports can set airline rates and charges through bilateral agreements or unilateral rate resolutions or ordinances after airline consultation.  Federal regulations provide guidance on setting airline rates and charges, and are largely incorporated in Title 49 U.S. Code (USC), enacted by the legislative branch, and Title 14 Code of Federal Regulations (CFR), established by the administrative branch.  Many legal cases ruled by U.S. courts and administrative cases ruled by the Department of Transportation (DOT) helped clarify contents in Title 49 USC and 14 CFR.  Although some federal regulations do not extend to bilateral agreements, which are contractual obligations, those regulations have shaped the negotiation landscape between airports and airlines.

Two principles form the foundation of airline rates and charges regulations in the United States: reasonableness, and without unjust discrimination.

Overview of Rates and Charges Methodology

Airline rates and charges methodology can be classified as residual or compensatory.  The airport industry has created the third category, hybrid, in the last decade. In Airport Compliance Manual – Order 5090.6B, Chapter 18, the Federal Aviation Administration (FAA) provides definitions as follows:

As the FAA emphasizes in the compliance manual, as well as in 2013 Policy Regarding Airport Rates and Charges (the 2013 Rate Policy), an airport sponsor cannot impose residual ratemaking upon airlines and must obtain the residual guarantee through a bilateral agreement.  This clause has far-reaching implications – prohibiting airports from shifting financial risks to airlines without airline consent, and encouraging airports to plan prudently when taking additional risks.

If airlines are not supporting an airport in taking additional risks, typically in the form of undertaking a large capital project, the airport has two major options: (a) impose rates unilaterally after a careful affordability study and proceed with the capital project, or (b) revise the scope of the capital project and/or continue negotiating with the airlines.  If, through the affordability study, the airport concludes that estimated airlines rates and charges, together with other nonaeronautical revenues, are not adequate to pay all obligations, the airport must revise the scope or return to the negotiation table.

When airports and airlines cannot reach a consensus during an airline agreement negotiation, imposing airline rates and charges unilaterally usually disrupts the airline relationship for the years to follow.  The FAA states in the opening sentence of the 2013 Rate Policy that, “It is the fundamental position of the Department that the issue of rates and charges is best addressed at the local level by agreement between users and airports.”  Nevertheless, understanding airline rates and charges under unilateral ratemaking gives airport management a clear understanding of its leverage, and can usually guide the negotiation to reach an agreement satisfactory to both airports and airlines.

49 USC 40116 originates from the 1973 Anti-Head Tax Act, and prohibits “unreasonable burden and discriminate” but allows “reasonable rental charges, landing fees, and other service charges from aircraft operators for using airport facilities of an airport owned or operated by that State or subdivision.”  The term “reasonable” is open to interpretation.

49 USC 47107 sets certain conditions that an airport sponsor must agree to when receiving federal grants.  The FAA eventually developed a document referred to as the grant assurance, which becomes a contractual obligation between the airports and the FAA.  Since a majority of U.S. airports, if not all, have received federal grants under the Airport Improvement Program, the grant assurance is one of the most important documents on airport rates and charges.  The grant assurance reiterated the requirements in 49 USC 47107 that the airport must “be available for public use on reasonable conditions and without unjust discrimination.”  The grant assurance also incorporates other rules and policies, such as the 1999 Revenue Use Policy, which prohibits an airport sponsor from using airport revenues outside the airport, except for limited exceptions.  The FAA published a clarification in November 2014 that aviation fuel taxes are subject to the revenue use policy, which caused some major issues for smaller airports.

49 USC 47129 requires the Secretary of the Department of Transportation (DOT) to determine whether an airport fee is reasonable or not, and to set out a procedure to resolve airport-airline disputes regarding airport fees.  Accordingly, the DOT developed a rates and charges policy (discussed below), and established a procedure, codified as 14 CFR Part 302, with subpart F applied to airport fees.  This procedure does not apply to any dispute related to bilateral agreements. Among others, the procedure requires an airport sponsor to respond within 14 days and to set forth the answering party’s entire response.

The FAA developed an interim policy in 1995, as required by Congress in 1994, and finalized the policy in June 1996 (the 1996 Rate Policy).  The FAA discussed at length supplemental information regarding the details of rates and charges considerations, many of which still have reference value today.  However, the 1996 Rate Policy was quickly challenged by airlines, and a major portion was vacated in August 1997.  Among other issues, the 1996 Rate Policy requires airports to use the historical cost approach in setting airfield fees, and to use any reasonable methods in setting other aeronautical fees.  The court of appeals considered this approach arbitrary and capricious.

Dozens of legal cases and administrative cases have put the FAA’s interpretation to the test, and continue to affect airport sponsors when they determine how to set airline rates and charges on a unilateral basis. Selected legal cases are as follows:

Selected DOT rulings are as follows:

The most recent case is United Airlines vs. Port Authority of New York and New Jersey regarding ratemaking at Newark International Airport.  This case is ongoing as of March 2015, and the docket can be found at this link.

Airport sponsors are encouraged to consult their rates and charges counsel, because interpretation of general principles – reasonable and without unjust discrimination – will be continuously tested by future rate disputes.  Some potentially acceptable practices when setting rates unilaterally are as follows:

Although the DOT stated that “practices of other airports are not necessarily decisive for reasonableness determinations,”  it is nevertheless beneficial to understand how other airports set rates and charges. 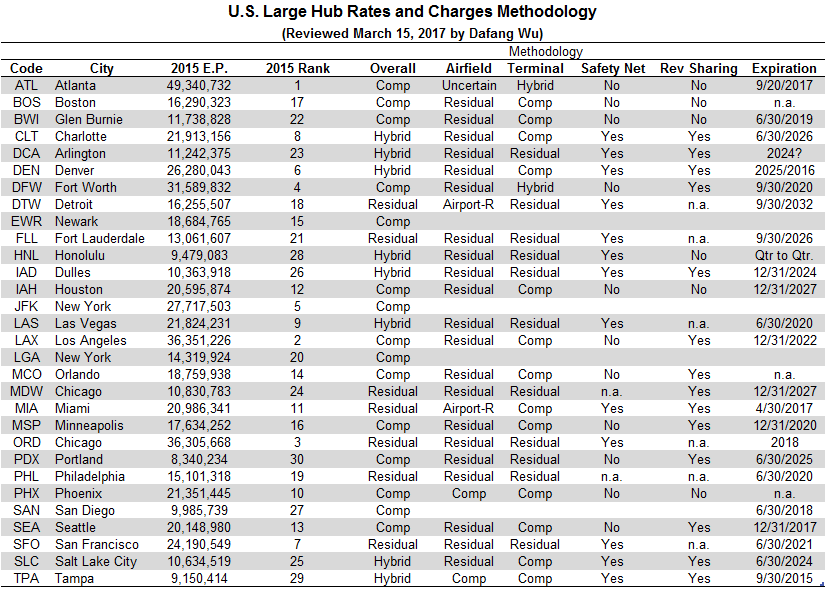 Ratemaking methodologies at large-hub airports continue to shift from residual to hybrid or compensatory.  However, instead of setting rates by ordinance, more airports, such as LAX, MCO and SEA, are adopting a combination of rate ordinance and rate agreement.  In this structure,

This trend may not be true for medium-hub or small-hub airports, which are struggling to develop additional air service when U.S. airlines continue to practice capacity control and route optimization.  Smaller airports are more susceptible to retaliation acts when attempting to impose an airline rate unilaterally to increase revenues, unlike large-hub airports, which have relatively more power at airline agreement negotiation tables.