This article clarifies the definitions of airline rates and charges methodologies and discusses considerations when selecting a rate methodology.  Appendix A provides types of residual protection and revenue sharing at large-hub airports.  This article should be read in conjunction with US Airports Rate Regulation.  Rates and charges details for each large-hub airport can be accessed at this link.

Airline rates and charges methodologies, or airport/airline rate-setting methodologies, refer to how airports charge airlines for the use of airport facilities and equipment.  U.S. airports typically set a landing fee for the use of an airfield, and a terminal rental rate for the use of terminal space.  Implicitly, they decide how to recover the costs of landside operations, such as parking, rental car operations or ground transportation. Many airports also choose to set up rates for other facilities and equipment such as apron, common-use terminal space and equipment, loading bridges, and preconditioned air.

References to the rate methodologies are typically about the overall methodology for the airport, rather than the methodologies for the landing fee or terminal rental rate.

The aviation industry classifies rate methodologies into 3 types: residual, compensatory, and hybrid.  Those terms are created to satisfy the needs to quickly provide some information regarding an airport’s financial framework, similar to how cost per enplaned passenger (CPE) is used.  Because there are no consistent definitions of the types of rate methodologies, an aviation professional should not rely on the classification of the rate methodologies published in the financial statements, reports, news articles, or even official statements and rating agency reports without examining the underlying details.

In Chapter 6 of Airport System Development published in 1984 by Princeton University, the author defined two types of rate methodologies:

Note: Residual rate methodology cannot be imposed on the airlines without bilateral agreements.

With the developments in airport finance, the aviation industry created the third type, hybrid, without a consistent definition.  In Chapter 18 of the FAA Airport Compliance Manual, the FAA defined hybrid as follows: “Sponsors frequently adopt rate-setting systems that employ elements of both residual and compensatory approaches. Such agreements may charge aeronautical users for the use of aeronautical facilities with aeronautical users assuming additional responsibility for airport costs in return for a sharing of nonaeronautical revenues that offset aeronautical costs.”  In ACRP Report 36, Airport/Airline Agreements—Practices and Characteristics, the author defined hybrid as “any mixture or combination of the prior two approaches and may include a “revenue-sharing” component of excess non-airline revenues generated at the airport.”

Since then, any methodology that is not pure residual or pure compensatory is conveniently lumped into the hybrid category.

Why Do We Need Hybrid?

The creation of the hybrid terminology allows us to express a two-dimensional relationship between the airports and the airlines.  In the 1984 Princeton book, the relationship is one-dimensional:

This relationship evolves into a two-dimensional framework to the airports: 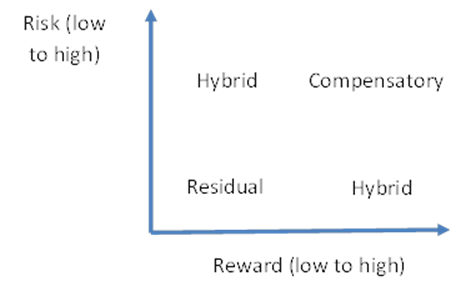 When a robot eventually replaces humans in determining the types of rate methodologies, it will be stuck here because the nebulous chart above has not clearly defined what is residual vs. compensatory, and it blends two very different types of contractual arrangements under the same term of hybrid.

As aviation professionals, we are ultimately concerned about the risk, because the reward can take care of itself.  Therefore, at the first step, we will revert to the 1984 Princeton approach and clearly separate all rate methodologies into two major categories.  The determining factor is whether the airlines have collectively offered residual protection— paying whatever is necessary for the airports to meet all obligations.

In the second step, we will consider how to reflect the degree of reward in this framework.

Therefore, we will eliminate compensatory -, and rename residual + as hybrid.  Because parking revenues are typically the largest source of nonaeronautical revenues, I will propose modifying the Princeton definitions as follows:

This set of definitions is illustrated as follows: 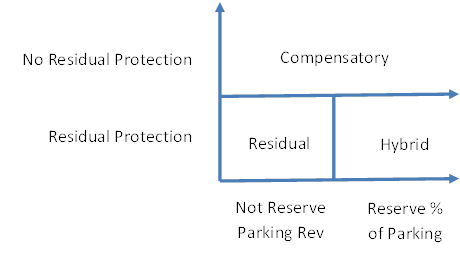 Selecting and Negotiating for a Rate Methodology

Selecting a rate methodology for an airport is very similar to conducting investment planning for an individual.  Before starting the process, we need to understand the investment objectives/horizon, and to evaluate the risk tolerance.

An airport’s objectives can be summarized in the following chart: 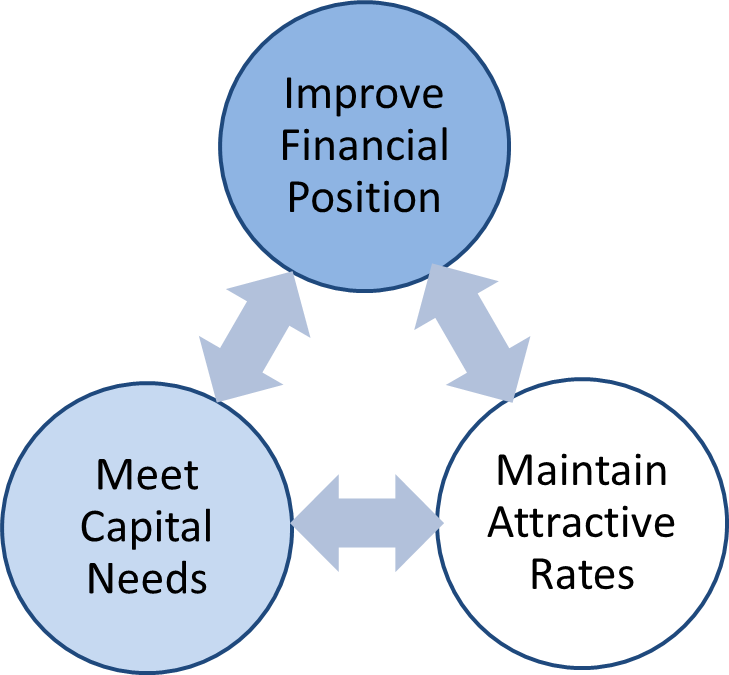 The three objectives conflict to a certain degree:

Intuitively, selection of a rate methodology should be tied to an airport’s facility development lifecycle:

The rate methodology an airport eventually reaches is influenced by far more factors than the airport’s preference. Among others:

In the end, there is no good or bad rate methodology.  The airports and the airlines will continue working together to mitigate risks, develop revenues, and split the resulting risks and rewards, shaping the financial framework at each individual airport.

There are three typical types of residual protection: airport-wide residual landing fee, dual or multi-cost center residual rate-setting, and extraordinary coverage protection, each of which is described below.

Under this type of rates methodology, an airport would establish two or more cost centers, and set up the rate in each cost center to fully recover the allocable costs.

Residual rate methodology cannot be imposed on the airlines without bilateral agreements.

Many airports share a certain amount of revenues with the airlines, and receive an ECP in return.  The ECP allows the airports to recover from the airlines whatever amount is necessary to meet all of the airport’s financial obligations, which provides a safety net to the airports.  Such large-hub airports include DCA/IAD, DEN, HNL, and TPA.

Types of Revenue Sharing at Airports with Hybrid Rate Methodologies

The airports with hybrid rate methodologies may share revenues in the form of net revenues remaining, which is the amount left after the airports meet all their financial obligations, or as a direct credit to the landing fee or the terminal rental rate calculation.

Metropolitan Washington Airport Authority has just executed new 10-year agreements with the airlines operating at DCA and IAD, effective January 1, 2015.  In a draft airline agreement posted online, MWAA defines in Section 9.05 that Net Remaining Revenues shall equal Revenues plus Transfers less (i) O&M Expenses; (ii) required deposits to maintain the O&M Reserve; (iii) Debt Service; (iv) Federal Lease payment; (v) required deposits to any Debt Service Reserve Fund; and (vi) required deposits to the Emergency R&R Fund.  MWAA further agreed that Net Remaining Revenues would be split between MWAA and the airlines, based on the formula described within Section 9.05.  In return, MWAA receives an ECP. Both DEN and TPA use a similar rate methodology.

Types of Revenue Sharing at Airports with Compensatory Rate Methodologies

As mentioned in other articles and videos, maximizing profits may not be the top priority of an airport’s financial operations.  Under compensatory rate methodologies, many airports choose to share revenues with the airlines, in order to gain airline support of the capital program, rate calculation, or air service development.  Those airports typically have a strong financial situation and enjoy high debt service coverage, and thus can afford to share certain revenues with the airlines.  Because they don’t gain an ECP in return, the rate methodologies they are using are still classified as compensatory.

The approach through which those airports share revenues with the airlines is quite similar to their hybrid peer airports:

Some airports, such as BOS, DFW or PHX, have pure compensatory methodologies and do not share revenues with airlines.