This article includes discussions of the per turn fee issue at U.S. airports, the options of setting per turn fee, and related considerations.

Traditionally, U.S. airlines lease terminal space on a preferential or exclusive basis and pay terminal rent based on the square footage.  This business model does not work for low cost carriers (LCC), which may operate less than daily flights at an airport.  For example, for a holdroom with 2,000 square feet and $100 per square feet, the holdroom cost per enplaned passenger for a weekly flight of 150 passengers would be $24.  LCCs, such as Allegiant Air, sometimes demand a total cost per enplaned passenger (CPE) lower than $6.00 before operating at an airport.

During the Great Recession, U.S. carriers began to flock to large-hub airports to pursue business travelers, withdrawing services from medium-hub and smaller airports.  As shown in the figure below, airports with a large-hub ranking in 2007 expect to see an average increase of 5% in departing seats in 2016 compared to 2007, and airports with a small-hub ranking will see an average decrease of 15%. 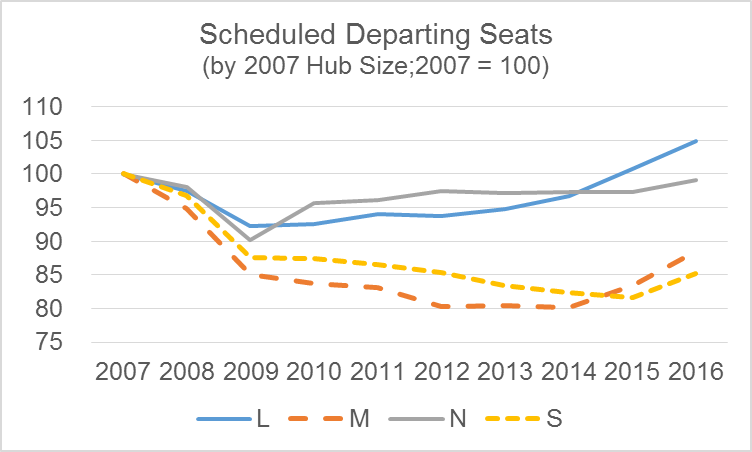 Facing declining traffic, flat level of federal grant, and inadequate PFC collections, small airports have been struggling to keep existing air service and to pursue limited opportunities of additional air service.  As shown in this dashboard, network carriers are adding capacity at a year-over-year rate of less than 4%, with a major component in large-hub airports, and LCCs, such as Spirit, Frontier or Allegiant, are adding 17% to 20% capacity in the 4th quarter 2016.  However, the strategies of LCCs vary significantly:

Therefore, Allegiant becomes the carrier that small airports try to pursue for additional air service.  Unlike Spirit or Frontier that may sign an airport agreement, Allegiant prefers to remain a nonsignatory airline, demand a CPE near $6.00, and pay airport fees on per turn basis, and may leave the market immediately when it doesn’t achieve the targeted results.

Small airports use two major tools to attract new carriers: air service incentive program, and per-turn fee.  Under an air service incentive program, an airport may waive the full amount of landing fee and terminal rental rate up to two years for a new entrant, or up to one year for existing carriers.  The per-turn fee is typically charged for each operation/turn, and may cover all or some of the components below:

There are three major options when setting a per-turn fee:

Fee per operation is clearly preferred by LCCs, which typically operate an aircraft with more than 150 seats.  Comparatively, regional feeders of network carriers may operate regional jet far less than 100 seats per aircraft. When fee per operation is expanded to cover not only the holdroom costs, but also baggage makeup and baggage claim, it may result in much lower CPE for LCCs.

In December 2014, Airlines for America officially submitted a letter to the Federal Aviation Administration (the Per-turn Fee Letter).  The letter was initially triggered by the airline negotiation at two airports, but applies to all other airports in a similar situation.  Among other questions, the letter asked,

Airport Council International – North American (ACI-NA) and American Association of Airport Executives (AAAE) filed a joint letter with the FAA in May 2015, urging the FAA to be exceptionally cautious and avoid adopting any per se rules beyond the Rates and Charges Policy.  Among other issues, the letter stated that airports are entitled to adopt different ratemaking methodologies, including rate by ordinance, which may be more appealing to certain types of carrier than the others

After more than one year’s deliberation and inputs from many industry participants, the FAA provided a response in February 2016, restating the rates and charges policy but refusing to address hypothetical questions.

The per-turn fee issue poses a potential dilemma for airport operators: the network carriers may be considered as the best customer for the airport industry by committing to airline use agreements, but the airport operators are sometime pressed to design a per-turn fee structure that appears to favor LCCs that may leave any time.  However, one common argument is that the LCCs are operating under a completely different business model, using low air fares to attract a new class of air travelers who would otherwise not travel, sometimes referred to as the “southwest effect.”  The airport operators are obliged to set reasonable aeronautical rates and charges, but have no obligations to make sure all airlines have the same cost per enplaned passenger.

Nevertheless, the network carriers seem to have adopted a unified position on the per-turn fee issue, and refuse to execute airline agreements that may result in a materially lower cost per enplaned passenger for the LCCs.  As shown in this Excel file, there are many options available to set per-turn fee rates, and each airport operator will continue to customize the ratemaking to reach a mutually agreeable solution.